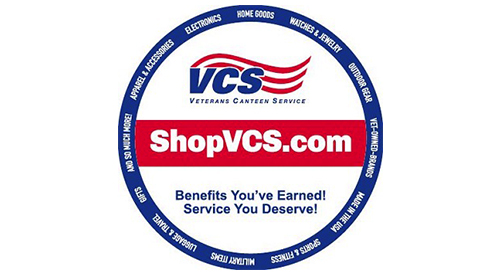 Your online shopping benefit, ShopVCS.com, offers exclusive deals and delivery on thousands of items directly to your home. Membership is free! Ready for a road trip? Get special deals on Firestone tires from PatriotStoreDirect! 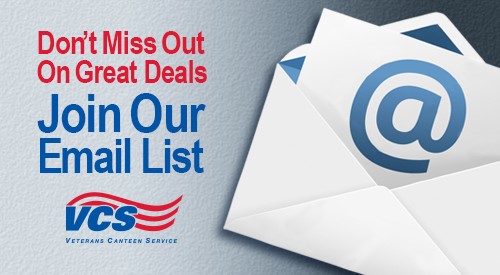 Sign up to receive emails on our latest arrivals, special promotions, updates and more.

Established in 1946, Veterans Canteen Service (VCS) was created to provide articles of merchandise and services at reasonable prices to Veterans enrolled in VA healthcare system, caregivers, and visitors. Since its conception, VCS’ mission continues, incorporating a strategic Veteran-centric approach emphasizing the importance of service to Veterans and supporting VA’s overall mission. VCS provides retail, food, coffee, and vending services across the country.

Many Veterans show their pride by wearing service hats, broadcasting the conflicts in which they served, from World War II through the wars in Iraq and Afghanistan. When Bill Brown, a Veteran of World War II and the Korean War, reached out to the Gainesville canteen about replacing his aging service hat, Canteen Chief Scott Diffenderfer started making calls to acquire two hats for Brown. Apparel vendor Eagle Crest procured the hats, but upon learning of the hats’ intended recipient, Eagle Crest overnighted two hats to the Gainesville location for Brown – at no charge.

“Eagle Crest (was) honored to ship these hats to Gainesville without cost to the VCS or the Veteran, so he could replace his WWII hat,” said Eagle Crest’s Todd Porter.

Brown, 92, said he was thrilled to receive the hats and blessed to have them gifted to him from Eagle Crest.

“I cannot thank (Eagle Crest) enough for taking the time to ship these caps to the Canteen for the Veteran without a cost,” said Mark Thomas, a buyer for VCS. “This by far shows that (they) continue to support the VCS Mission without personal gain!”

VCS Food Service Worker Cynthia Rodriguez saved a man’s life by performing the Heimlich maneuver when he was choking.

She noticed one of her regular customers at the El Paso canteen was standing and pointing at his throat during his lunch; his face was red. Without hesitation, Rodriguez rushed over to the man and performed the Heimlich maneuver, dislodging the food from the man’s throat.

“I was excited I saved somebody,” Rodriguez said. “It was a blessing to help him.”

This was not Rodriguez’s first experience saving a person’s life with the maneuver. Four years ago, she saved a patient’s life at a prior job with the technique.

“I’m very proud of her,” said Richard Monarrez, the El Paso Canteen Chief. “We’re happy to have our own little hero here.”